The Ever-evolving Idiosyncrasy of OX 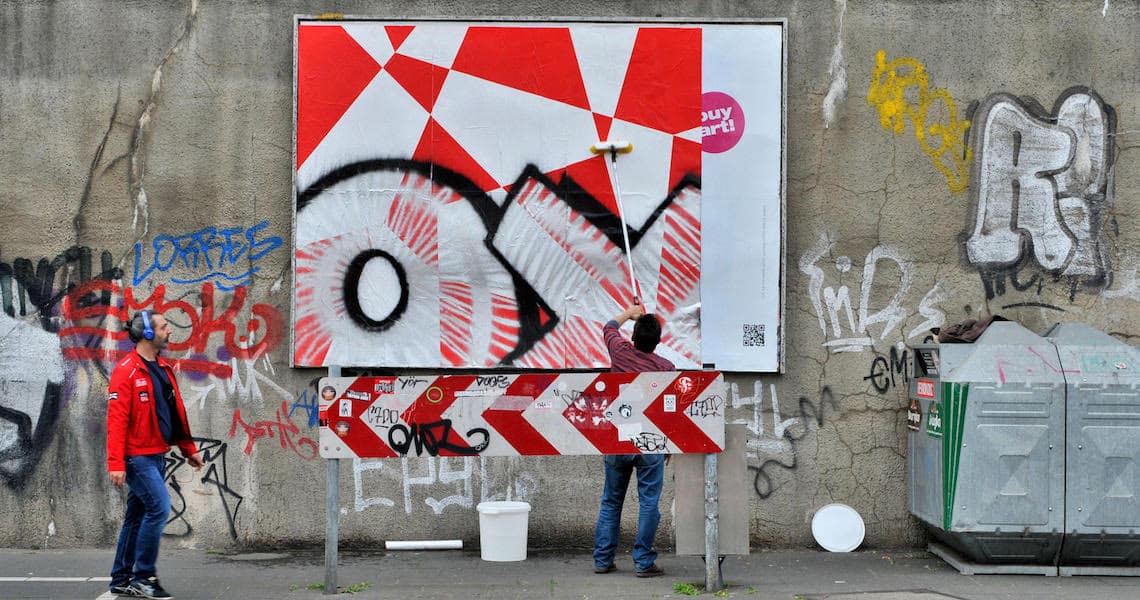 Vivid, expressive and pictographic, billboard posters OX disperses throughout the visual universe impose on our senses with a peculiar charm. Unfastened by complicated narratives, they instantly settle within our visual field as something welcome and natural, opening an unexpected door to a different kind of urban aesthetics. Imbued with a healthy dose of humor, OX’s outdoor pictures mark unexpected, colorful glitches in the prevailing grey reality of the cityscape, made to entertain and inspire. 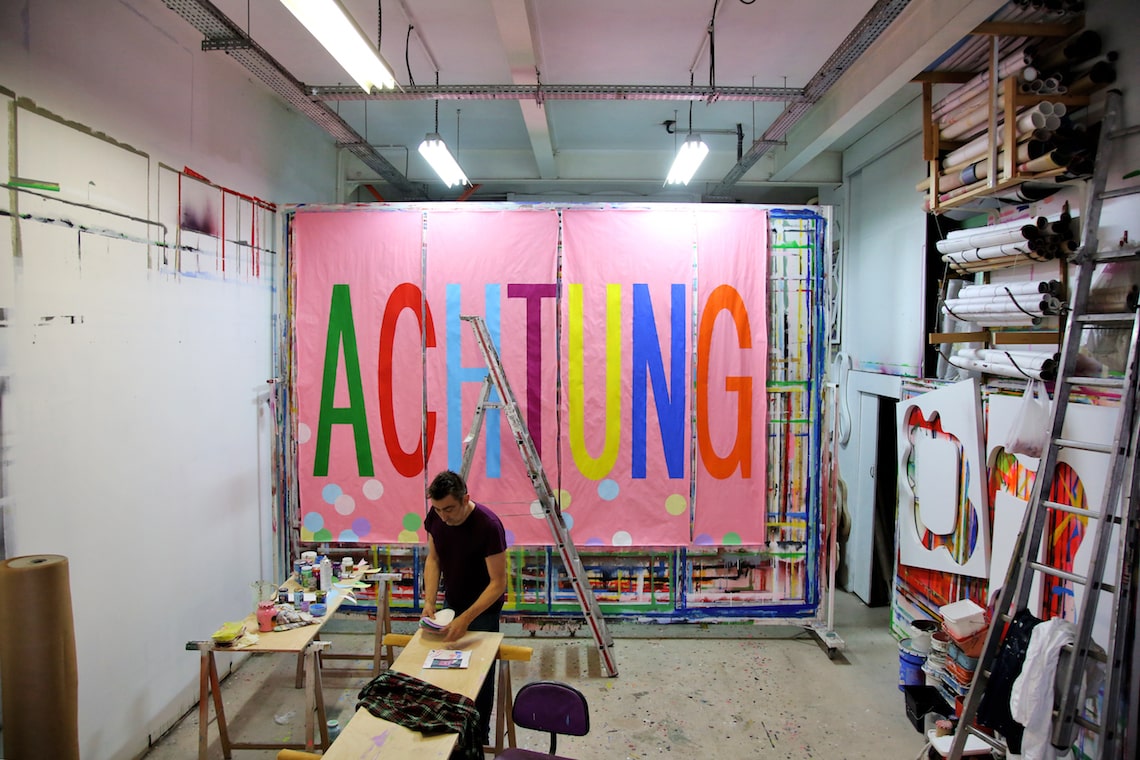 OX in his Studio

Having begun his artistic activity in the early 80s, OX was never a conformist. From the very first steps he made, his ideas and connections were created in the world of the artistic rebels, groups and figures who were creating novel modes of expression. Working both in the street and off of it, he was a member of the infamous Frères Ripoulin collective, whereas their punk approach to creativity exuded a fresh inclusivity making no distinction between illicit actions outdoors and gallery shows. The first OX’s billboard takeovers date to this era, while he’s built a comprehensive practice over time, fusing multiple influences and mediums within his idiosyncratic style. Today, he is one of the most unique figures in the domain of public art, since his work can be regarded as either a contemporary amalgamation in the spirit of postmodernism or simply, as – Street Art. Hence, it would be unfair to place OX’s body of work within a single movement, as its distinctive stylistic traits best reflect the present state of international artistic pluralism. 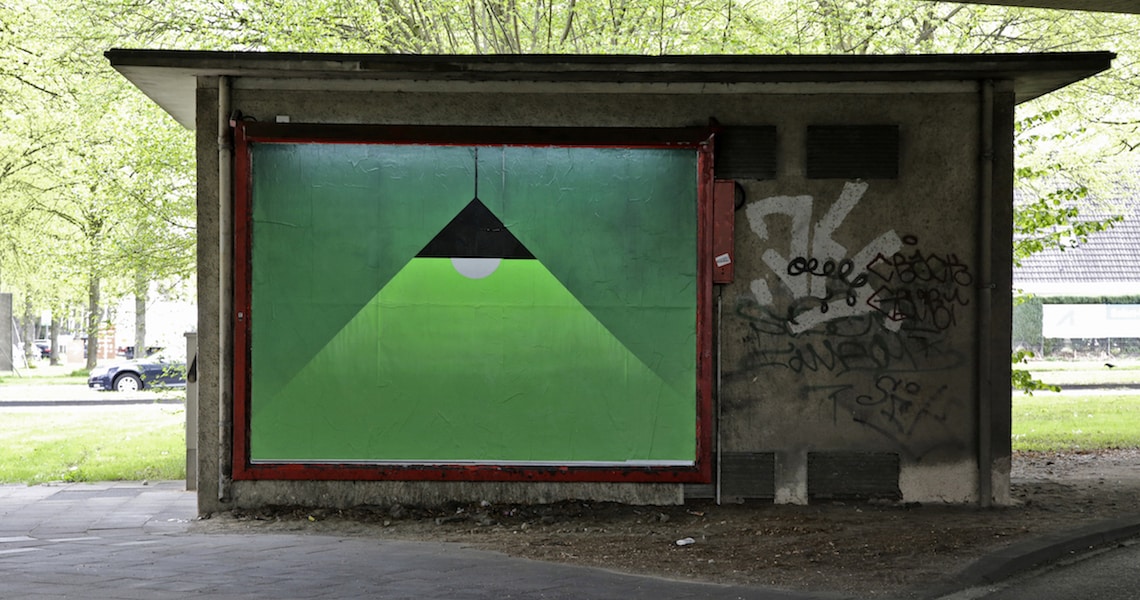 A Seamless Amalgamation of Ideas

Still, the unequalled expression OX developed can be put in connection with various artistic ideas. Seeking inspiration in the Figuration Libre movement, kitsch, comic and satirical magazines, and also the figure of Keith Haring, OX was growing in an environment deeply influenced by Situationism, where the street only served as the canvas for experimentation. His fascination with pop culture and his opposition to the overly theoretical conceptualism guided the sharpening of his artistic manner, which shifted through different dimensions of the abstract. It was the interest in reversing the commercial in Pop Art that influenced his present-day imagery the most, as he kept removing the crucial advertising elements from the frame keeping only the nonsensical – “the model, the backgrounds emptied of their contents, the hidden texts…” Admitting that he had to adopt the powerful visuals of advertising, OX succeeded in creating a recognizable pictorial language of strong geometric and abstract elements and bold color. Subjects in his work are frequently environment-driven, serve as a basis for the witty composition, but do not bear the crucial importance, while the power of his aesthetics remains within his particular system of colors and shapes.

Although he is best known for his outdoor installations, OX defines himself primarily as a studio artist, while the aesthetics he nurtures emerges as the crucial element of his work in all the media he uses. Every piece he invents is first conceived and planned in the studio, while techniques for the public and gallery pieces differ. It’s been a journey from the cheap kraft paper and fluorescent acrylic to the flawlessly finished studio pieces constructed with finer materials, including wood. His style evolved along with the introduction of new techniques, which can be seen even in the array of work created in recent years.

Breaking away from the rigid rectangular shape of a billboard, OX’s studio works all follow a free-form, featuring undulating edges or polyptych setting. Elaborate geometry fluctuates from the associative to purely abstract, consistently carrying references to urban environment, either in deformed shape or in color. From his excellent series “Échantillons”, to the present installation-like constructions, OX has used the urban setting as the prime inspiration. We can catch glimpses of billboard edges, traffic lights, pavement or building sites throughout his work, all fitting a composition effortlessly, as if they hadn’t been rendered through a great number of layers. Stratified both visually and conceptually, this work takes us on a meditative trip through aesthetic aspects of the cityscape, sometimes emphasized to the maximum by bright color, and sometimes stripped to their bone.

Such exploration of the basic compositional elements brought OX to his present work hinted in “The Half Blank”, in which color has loses its original value. Energized wavy shapes are marked out in wooden frame in “Le Couple”, connected with adjustable straps that bear the only hint of color. Outlined by wood and enhanced by the primary palette signifies a new line in OX’s explorative practice, where he returns to the very basics of form and composition in a rather literal way. We can still see his unmistakable language within this installation, but here, it has reached a new level of existence, free of the fluorescent, the flat and the immaterial. This may be the first time we detect a tactile quality in OX’s work, excited to join him in a new plane of delving into space and investigating spatial relations. At the same time, this work represents a new mature stage in OX’s oeuvre, one that promises to develop radially, in different mediums, breaking away from the expectedly linear model of progression. 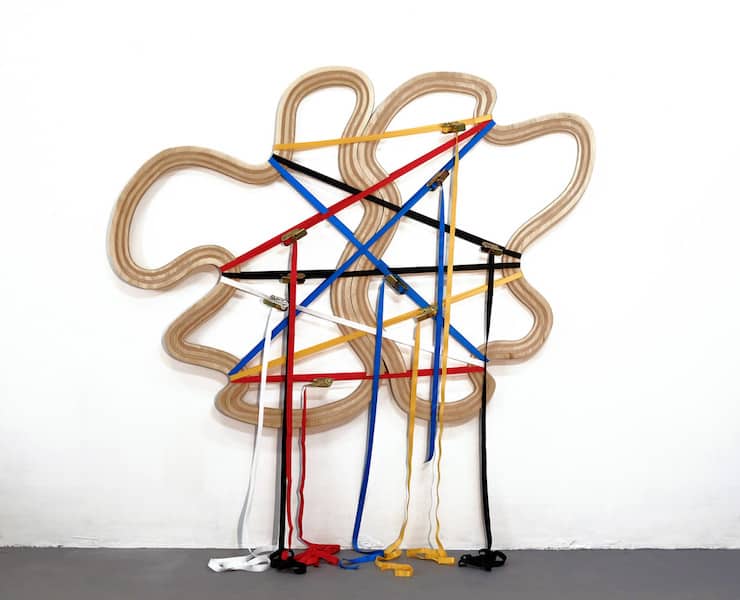 The Unbroken Coherence in Style

Returning to the OX’s public works, we can detect a clear connection between them and his studio pieces. Affected by the context they are set in, his billboards carry the same stylistic traits as do his studio pieces, supporting the integral coherence of his practice. It must be mentioned that such elaborate consideration of composition and environment elevates OX’s work high above any Street Art gimmick or decoration. Although his visuals ultimately alter the commercial message of the advertising board, he rejects the association with the adbusting movement due to the essential differences in approach.

While Adbusters are highly political and rebel against harmful effects of advertising, OX uses this attractive way of communication to change the reality, if only for a moment. This great contemporary colorist provides an alternative outlook onto the city and a welcome visual break for anyone who appreciates the possibility of a more soulful surroundings. Thus, he continues to open witty portals for everyone, motivating us to reconsider our environment and perhaps – act in it.