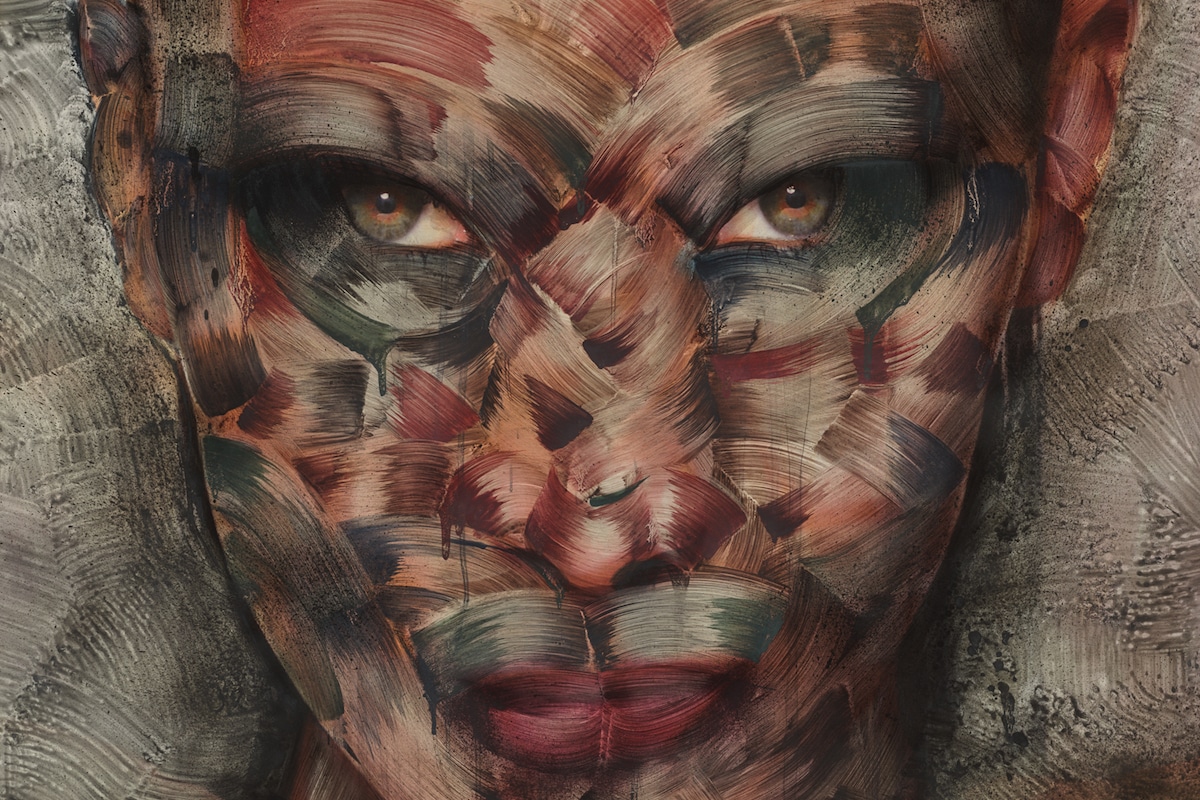 Reflecting upon contemporary dystopia, Vermibus created a new body of work contemplating the artificial nature of reality on multiple levels. Through exploration of some of the most prominent aspects of consumerism, he built a recognizable oeuvre deliberating various imposed standards, which culminates with his latest project entitled “In Absentia”.

The suggestive title of this comprehensive series can be read “in the absence”, but also “in rebellion”, and it can be understood as the legal term referring to court proceedings being conducted while the accused is absent. However, “In Absentia” unveils another, introspective layer of Vermibus’ work. Macrocosms of consumerism intertwine with microcosms of the artist’s subjective journey into the depths of the self, while the observers are allowed to connect to both. Presenting advertising as the ultimate manifestation of constructed, fake reality, the artist compares the urban environment with human personality structure and inspires meditation on outer and inner problems the people encounter simply by living in the post-truth society.

True Face of the Parisian Metro

With creation of twenty-one solvent based pieces individually, each revealing their origin with their titles, Vermibus conjured up a series of work, crowned with an atmospheric video piece.

Diverting from the documentary nature of the previous short films the artist had made, “In Absentia” video is an autonomous work of art that focuses on discovering the truth, stripped of all embellishments. It is a brooding visual tale about urban life, cleared of every and any distraction, including people, alluding to a plethora of issues the citizens face daily, from visual pollution to personal loneliness.

Having more than 1.520 billion passengers, the Parisian subway system served as the prime inspiration and the setting for the project. As the second busiest metro network in Europe, it is also the one with more than an average advertising pollution in comparison to other such systems in the world. All of the posters were first installed and the video was shot on the scene, inside the Metropolitan subway of Paris.

Descending into the City’s Subconscious

Observing the city as a living organism and people as its vital cells, Vermibus has assigned a new role to its subterranean structure – he sees it as the true face, the subconsciousness of the city, a place where darkest moments come to life. Descending underground, the artist symbolically embarks on a self-explorative excursion, drawing parallels between the grander city life ridden with artificiality, and stratified problematics of the human psyche. His subway adventure is marked by constant movement, confrontation with demons of society embodied in his signature poster installations, and most importantly – by the absence of people. It appears as if the city has lost its most vibrant aspect, allowing us to focus on what is most monstrous in it. The nightmares awaken, the truth is exposed and we are left to face the dreariness of our daily lives, both as social beings and individuals. Still, the journey Vermibus takes us on is not without hope, offering a tunnel exit bathed in light, brimming with the symbolism of revelation and peace. In this process, the artist reveals the malicious intent of advertising, a bearer of shiny things and utmost hypocrisy.

By completing a complex and extensive creative process of creation and installation of his pieces followed by the production of the video, Vermibus dares to ask one of the most daring questions – what are we hiding? Knowing that the answer cannot be easy to attain and face, he leaves us no choice and forces us to look either around or within ourselves.

New Conceptuality in the Work of Vermibus

A crusader for truth, Vermibus surpasses the domain of urban art, showing a singular approach to his actions. Acknowledging the public and activist characteristics of his work, “In Absentia” opens the possibility to observe this artist in a broader context. His activism represents a medium of delving and creating in public space, revealing a clear conceptual character of his art. Throughout his work, he propagates a particular philosophy and invites people to see the world more clearly, to recognize and overcome their fears in order to find rapture, while building his artistic language upon visual and ideational foundations set in his previous oeuvre.

Presented in the form of 21 solvent-based poster works and a video projection, “In Absentia” exhibition will be on public exhibition this November.