In present times, we can rightfully argue that street art is one of the most diverse and most exciting fields of artistic expression. The cultural recognition and institutional support street and urban art have gained, over the last few decades, have opened a whole new field of possibilities for artists to work on a larger scale and bring street art to a whole new level. This ambition to go bigger has resulted in an enormous interest in street art muralism, which became one of the most popular forms of public art expressions in our time. With all those monumental murals flourishing in the cities worldwide and attention shifting toward visual qualities of works, it became easy to forget the contextual elements from which street and urban art emerged – their rootedness in public, communal spaces and urban landscape. One of the urban art disciplines that still holds strong connection to that particular context is urban intervention, as one of the most subtle approaches that brings art into people’s lives through interaction and participation by reclaiming the city areas, rather than focusing on their beautification. French artist Levalet is currently one of the most innovative young artists to work in this discipline and his work can be seen as a revival of those initial tendencies in urban art, which insist on integration of urban structures into public artworks. 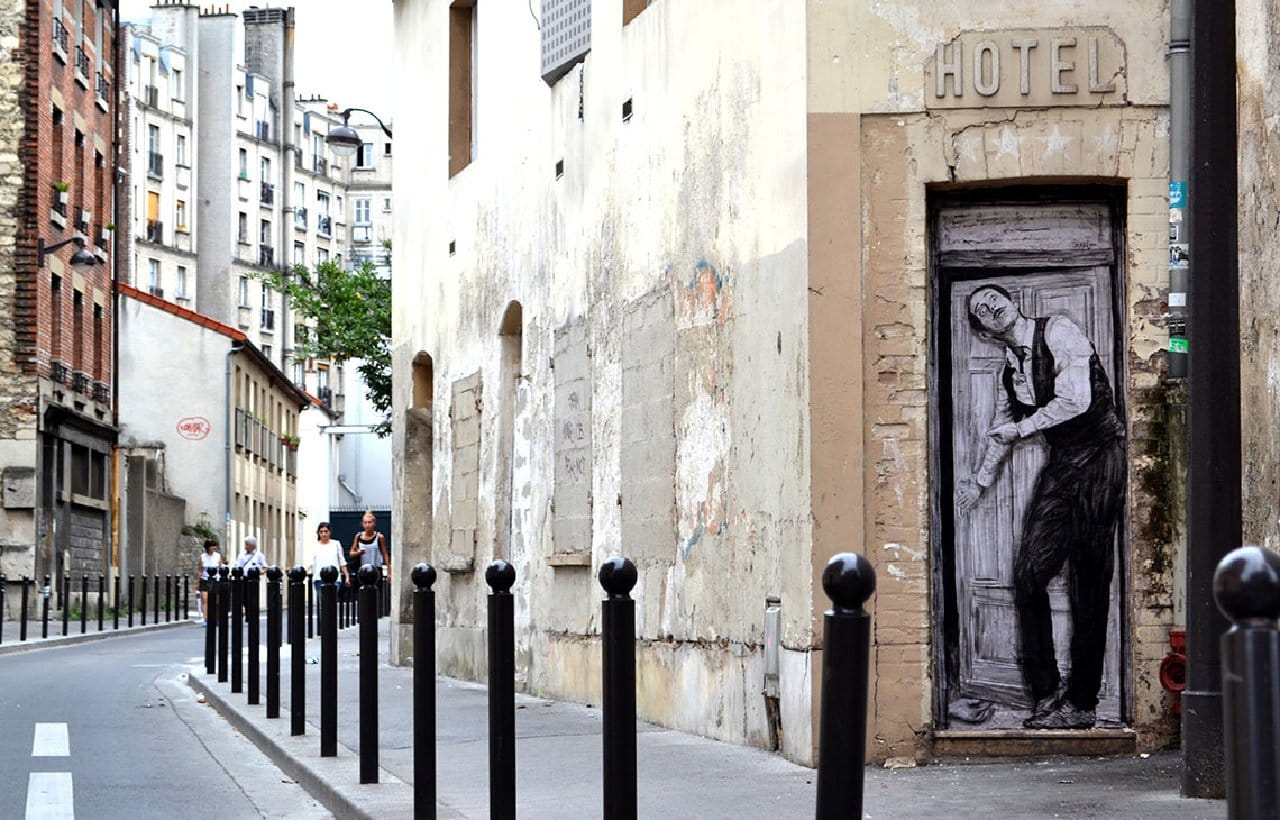 The French Tradition of Urban Interventions

To better understand the visual language of Levalet and the specifics of his creative process it might be a good idea to take a brief look into the tradition of urban art interventions, which is particularly strong in France. By the time New York gave birth to aerosol graffiti culture in the seventies, Paris already had a distinct urban art scene, which was growing on the foundation built by avant-garde artists and included all kinds of innovative techniques, from wheat pastes to stenciling and first culture jamming projects. In addition, two intellectual and artistic movements the Situationist International and Fluxus, prominent in France at the time, introduced new ways of thinking about the connection between the spacial and the social. Situationists introduced the idea of psychogeography, focusing on the playful and inventive strategies for exploring cities and bringing new awareness of the urban environment. Working closely to the intellectual tradition of Situationist movement, artists as Ernest Pignon-Ernest pioneered the direction in urban art that revolves around site-specificity and spacial interventions in urban landscapes. In a recent interview, Ernest Pignon-Ernest stated that “his works are not drawings but the location themselves” and that he does not create artworks in locations but “artworks out of locations”, creating “a reversed ready-made where the street becomes the work itself”. The artistic direction, set by Ernest Pignon-Ernest in the late sixties, is the one Levalet explores masterfully today, and he is among the most talented young artists to continue this particular tradition of urban interventions. 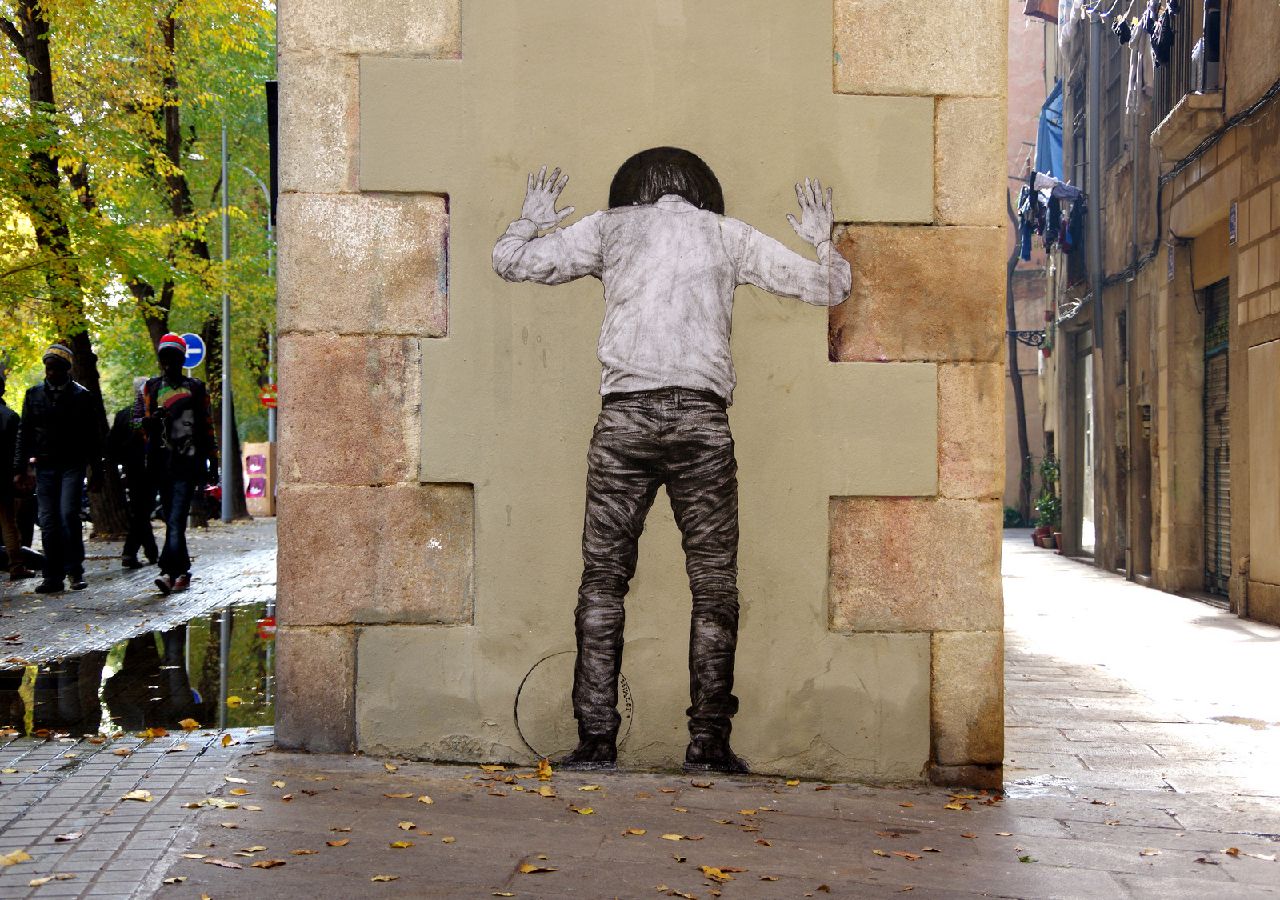 Levalet – Artist with a Keen Eye for Topography

Although he is no stranger to studio works, Charles Leval aka Levalet is best known for his monochromatic drawings, depicting whimsical characters, which cleverly interact with their surroundings. Working primarily with Indian ink, Levalet creates black and white imagery that comes to life once his artwork is pasted on a particular pre-chosen location. Because of their site-specific quality, works by the French artist rely heavily on the context of their creation and they are rarely done spontaneously, without premeditation. The practice of urban intervention requires careful study of physical and social aspects of a particular location, in order to add elements to the landscape or modify the existing one. In this regard, it is easy to see why topography and architecture play an essential role in the artist’s work and why he dedicates great amounts of time and energy searching for the right spot that can be turned into a stage for playful scenes he creates. In the work of Levalet, streets themselves become a medium, rather than an empty canvas used for artistic expression and this ingenious approach to public art is what makes Lavalet’s work ever so innovative and enticing. 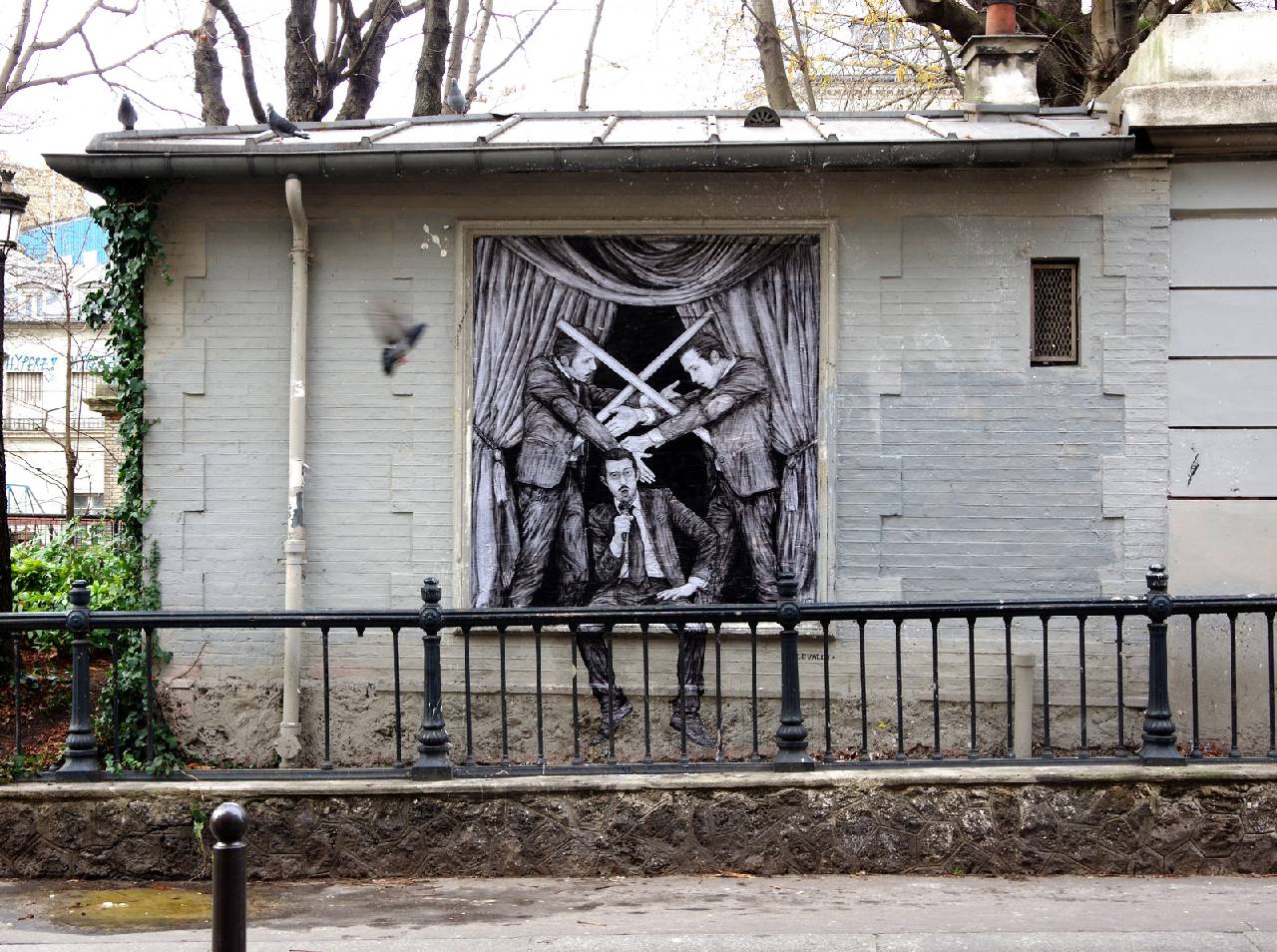 With his keen eye for city architecture, Levalet manages to capture all those details that ordinary passersby might overlook, and turn them into captivating narratives about contemporary society. By merging his interests in theater and cinema with his original painting style and a strong sense of absurd, Levalet creates dynamic sceneries where his characters playfully interact with each other, their surroundings and the beholders. Humorous, eccentric, mischievous, caught in various playful activities, his characters bring cheerfulness to the city streets, mesmerizing the viewers. Although the artist depicts his subjects realistically, often focusing on presenting everyday situations and mundane experiences, he always leaves a space of doubt, slightly shifting from the reality and leaving a spot to be filled with imagination. This deviation from the real is best seen in his works built around three-dimensional objects, where different dimensions collapse into each other creating the perfect optical illusions. Young French artist Levalet has recently joined the group of brilliant creatives represented by OPEN WALLS Gallery and this November his works will be featured in a solo show. The exhibition opening is set for November 5th, 2016.