Delightful, Artsy and Hidden Places to Visit in Berlin 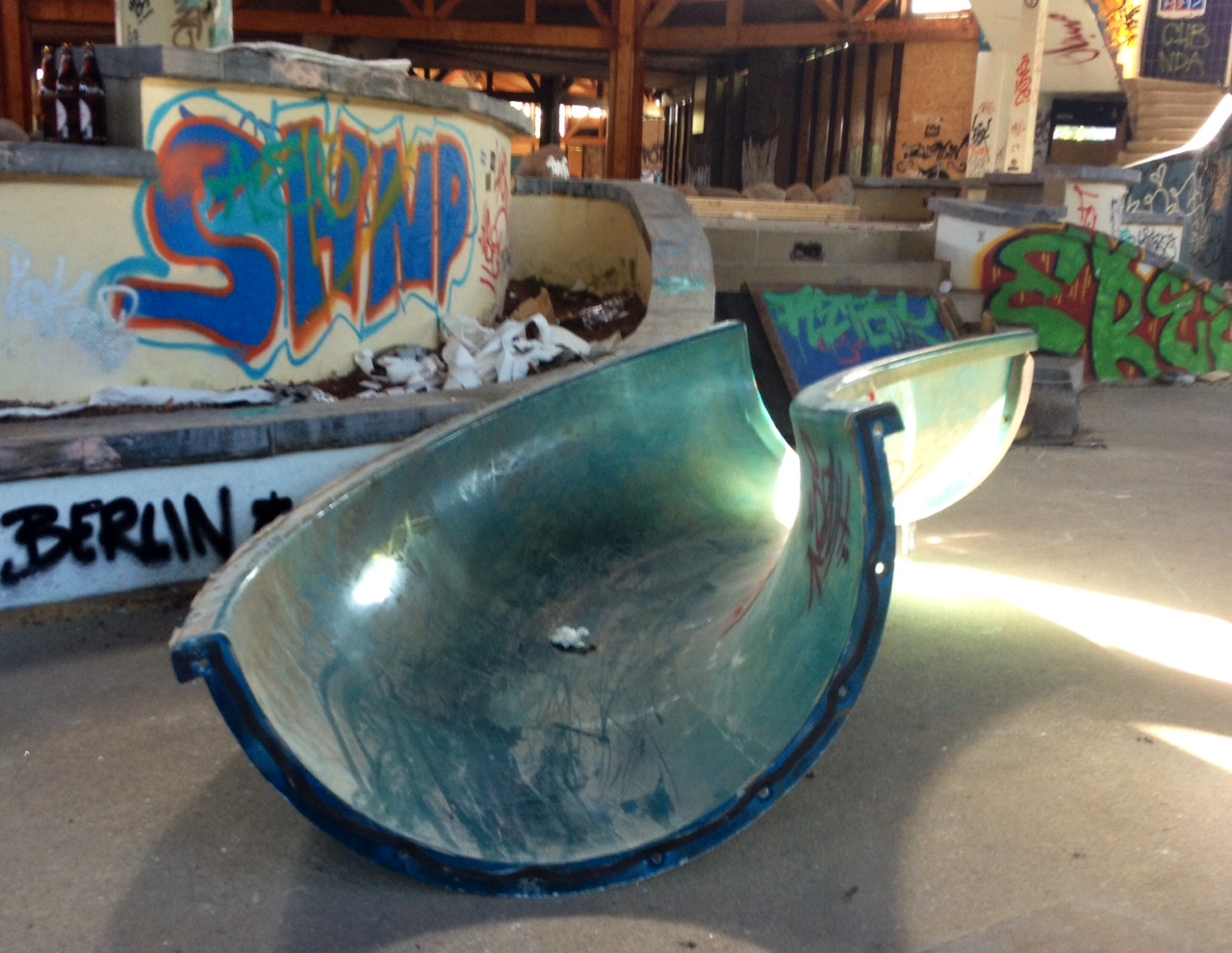 We already told you about the best places to eat out in Berlin, and we’ve talked about some of the hippest hotels as well. If you’re looking for the strangest museums, there is a number of quite interesting ones all across the city, and there is also a list of some of the coolest galleries and exhibition spaces, creative hubs that every art lover should know about. It almost feels like there’s nothing left to talk about! But don’t jump to any conclusions just yet, since Berlin is just one of those places – an inexhaustible wonderland, always offering something new. This time, we’re going to talk about a few lesser-known, hidden places in Berlin. These you won’t find on top of everyone’s “must-see” list, but you will get a few “wows” here and there, when you show them these pictures. Let’s take a look at the five artsy gems, hidden under the veil of the colorful, graffiti-loving Berlin.

Berlin Tempelhof Airport – Endless and Alternative Flatness in the City 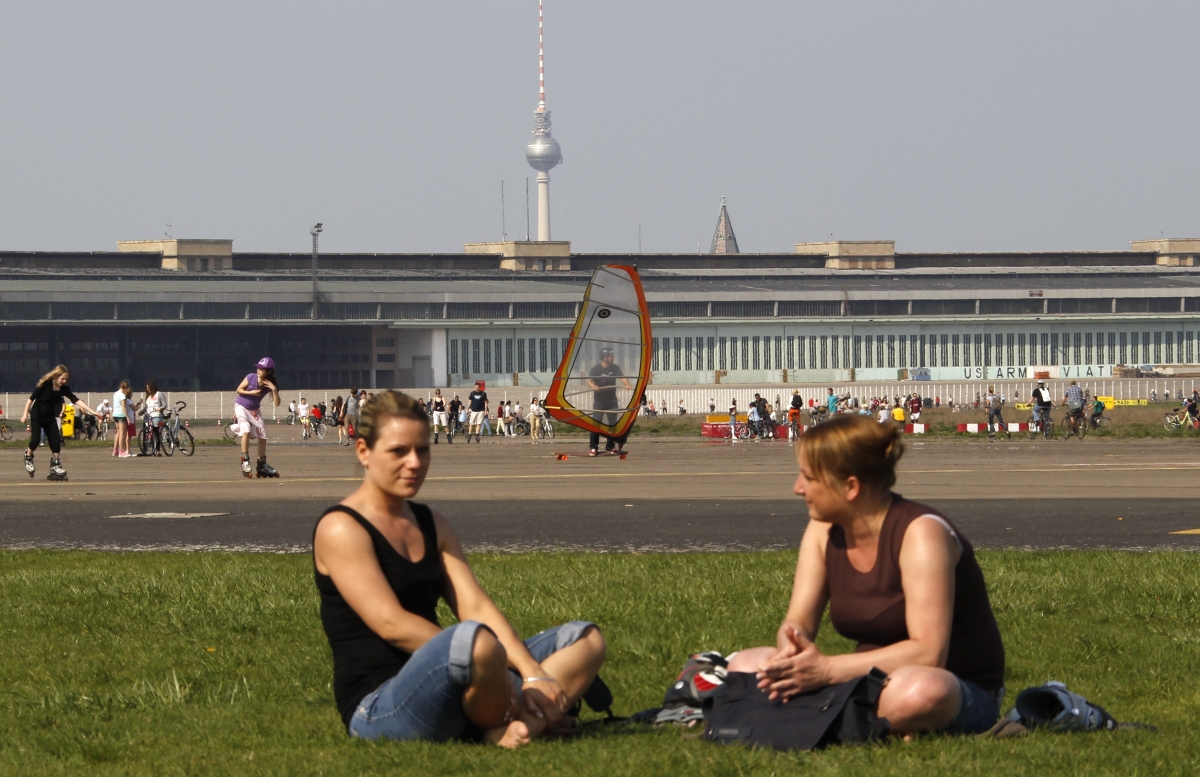 As you’ll probably notice, this list is going to consist mostly of the deserted, ruined places. It so happens that the entire city was built on ruins, both physically and socially, so to speak. Berlin is basically one of the most obvious reasons why the ruin has become so cool and ultimately so beautiful. You can even see how people are trying to imitate the “devastated condition”, and how the trashy aesthetics is becoming increasingly popular (we’ve already talked about this phenomenon, regarding the process of gentrification in Berlin). But if you want to get in touch with the real thing, you must come to Berlin directly. So let’s start from the biggest ruin of all: an abandoned airport! Tempelhof was one of Berlin’s three iconic airports, located in the southern part of the city. It stopped operating in 2008, due to a bunch of controversial issues, none of which are nearly as important as the fact that this beautiful, vast plane has been used as a recreational space for Berliners ever since. Whether a tourist or a German native, you mustn’t miss having a morning run here, or simply hanging out in front of the huge airport building. 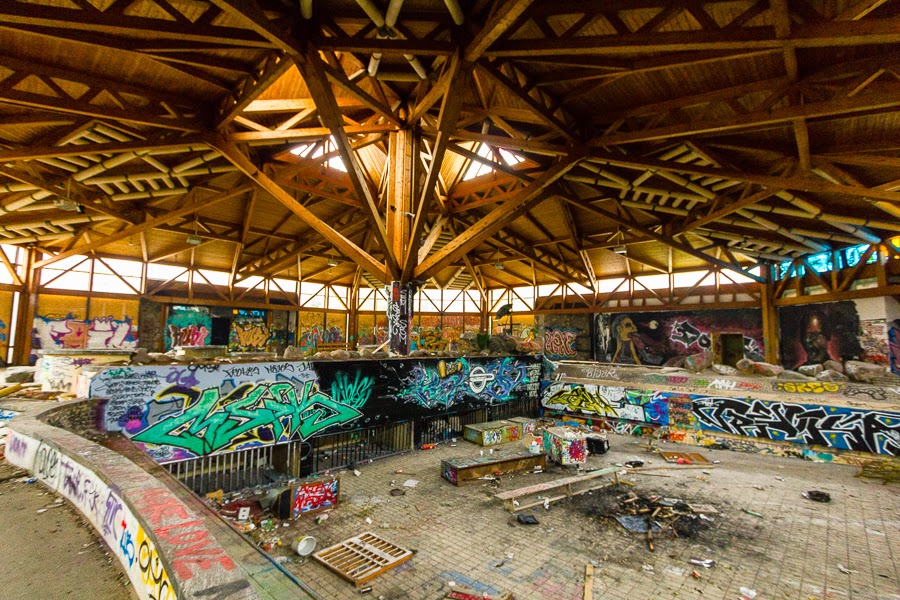 I was planning to save the best for last, but was simply too excited about this one, and had to bring it up as soon as possible. Blub, which is short for Berliner Luft und Badeparadies, is an abandoned recreational/swimming pool complex. Built in 1985 as a city spa center, enjoyed by as many as 600 000 visitors each year, it was eventually closed in 2005, due to some serious hygiene-related issues (apparently, they had problems with rats – ew!). The place has remained intact ever since – if you leave out the interventions made by the artists and the drunken locals. The passage of time has left its mark on this place, and it is becoming more and more embedded into nature surrounding it. This is a place where most of the locals like to hang out, mostly due to the otherworldly atmosphere, which makes you feel like you’re in a post-apocalyptic movie, or in a failed wonderland. A bunch of beautiful sights can be found everywhere among the ruins. The sun used to break in through the windows of the built spaces, which were all covered in spray and graffiti, so the entire space used to be bathed in colors. Now, the windows are mostly broken, and millions of pieces of broken glass lie on the floor, still shining like a rainbow. 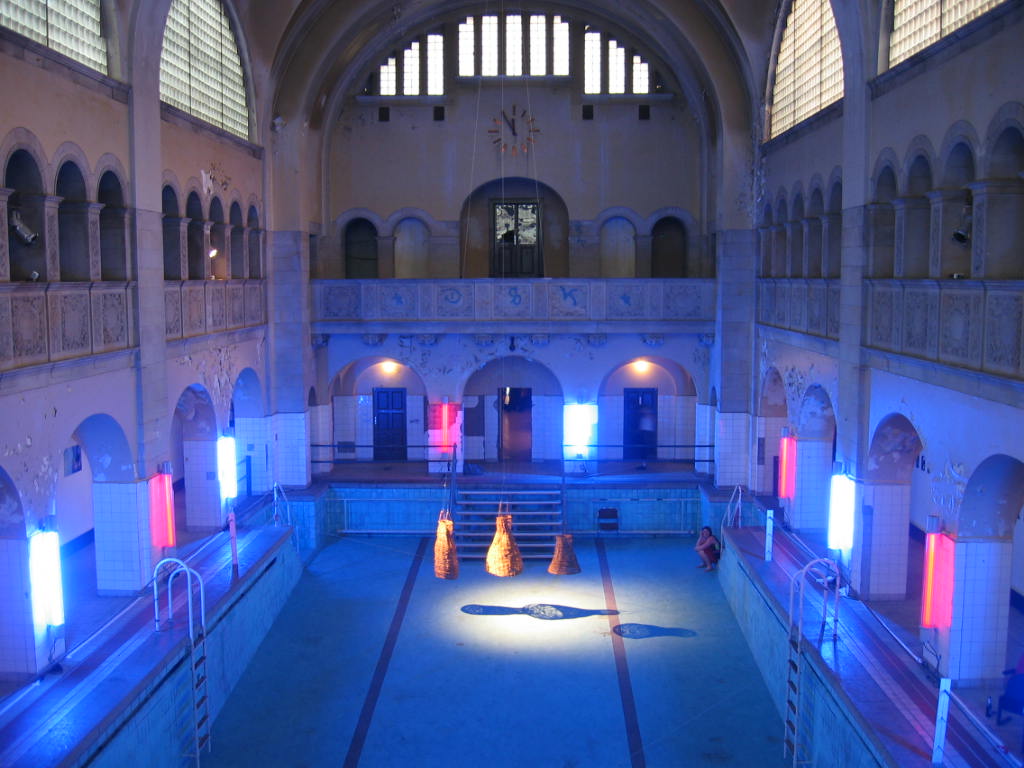 So this is another ex-swimming-pool venue, and it used to be a very cool place for hanging out and clubbing. This pool is a much older one – it was built in 1907 (!), and renewed after the World War II, in the 1960s (hence the aesthetics of the interior, incredibly reminiscent of this decade). The Germans somehow stopped feeling interested in using the place the way it was supposed to be used, and so the venue re-opened as a cultural hub in 2001. The building is more than 100 years old, and it is – actually, used to be – one of the precious gems of Berlin’s alternative scene. It used to offer studio spaces for both artists and musicians, to host the coolest, most prominent events and happenings (one of them being the famous Boiler Room, which takes its name from the actual name of one of the existing rooms). However, the place was shut down just recently, and it is not certain if it will open again – at least not in its genuine form. The reasons for this are the following: “Unfortunately, due to insufficient building security and not taken measures by the owner of the building the project STATTBAD had to shut down in May 2015“. 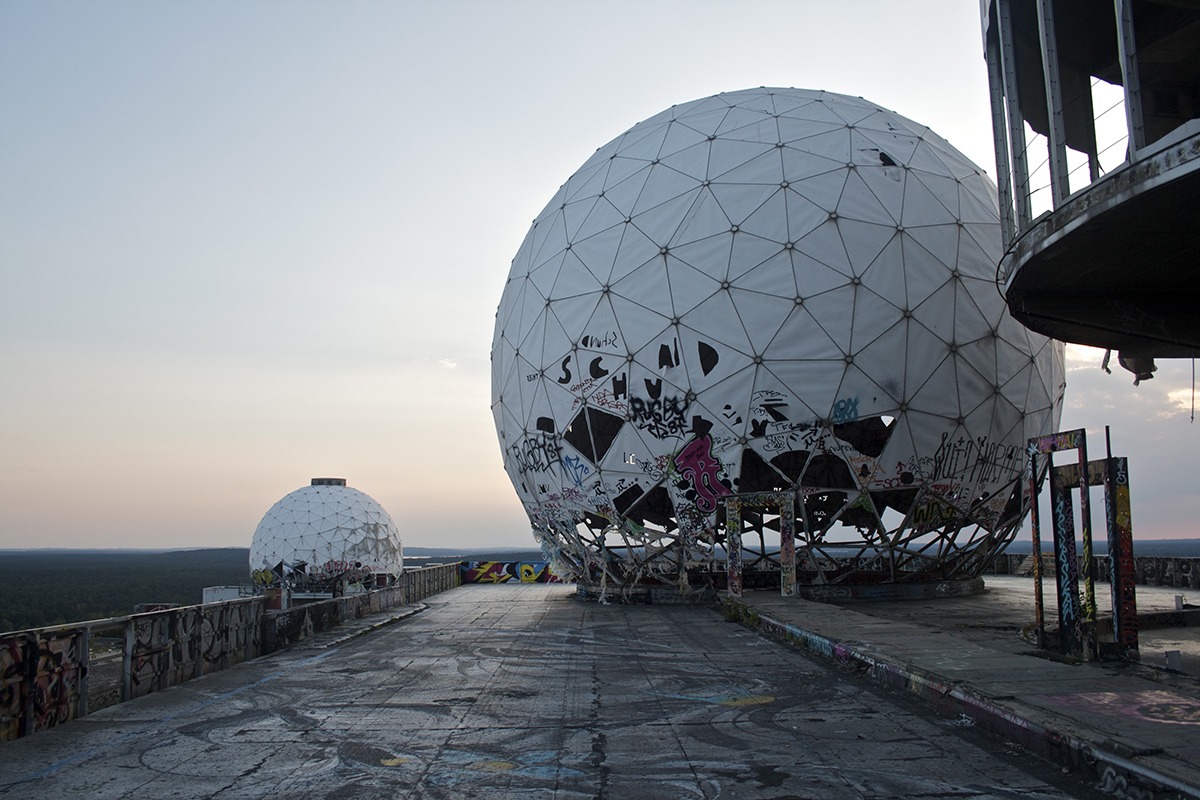 Beware – it is The Devil’s Mountain! The name of this hill was made with reference to an adjacent lake, but it is also quite a descriptive name, having its history in mind. The Devil’s Hill was man-made, out of approximately  75,000,000 cubic meters of debris from Berlin. This was, of course, done after the Second World War, over the course of the following 20 years. But the fact that the entire mountain was built out of rubble isn’t nearly as impressive as the fact that there is a building lying beneath it. And not just any building, as everything related to this place has an incredible symbolic meaning. It was the unfinished Nazi college building, designed by the infamous Nazi architect Albert Speer. The hill is now covered in greenery, which was suggested by the Senat of Berlin, in order to embellish the site. Yet, the thing that attracts visitors most is the former US National Security Agency listening station, located on the top of the hill. As you can imagine (if you don’t already know), thousands of conspiracy-based stories are related to this place. It is now completely abandoned, and you will find a number of interesting graffiti here. Some sightseeing tours include this place to their lists as well. 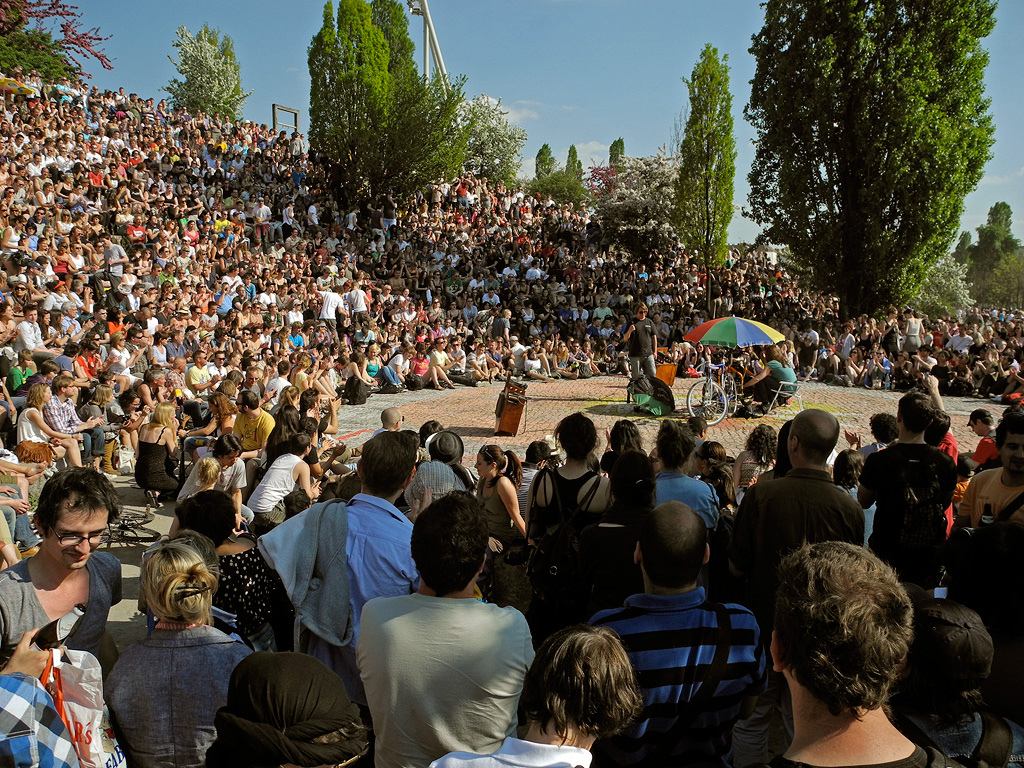 Ok, this place isn’t a secret really, it’s a regular and quite popular public space, but it is simply too cool not to be mentioned. This area used to be a Train Station, and you can still see the remnants of the rail, if you take a look at the top view. Another interesting story speaks about its more recent history, since the place used to be divided by the wall, and when the wall fell, the eastern part was turned into a park, and the western is now a flea market, and it is one of the most famous flea markets in the world. It is a place where you can find basically anything, especially if you’re looking for something vintage. The park itself is a great place as well, especially on Sunday afternoons. It is when the Bearpit Karaoke Show is held – a cultural event you should definitely go to, if you want to have a good laugh and see thousands of people gathered around in circles around an informal, public stage.