Was Banksy Ever Really in Berlin? 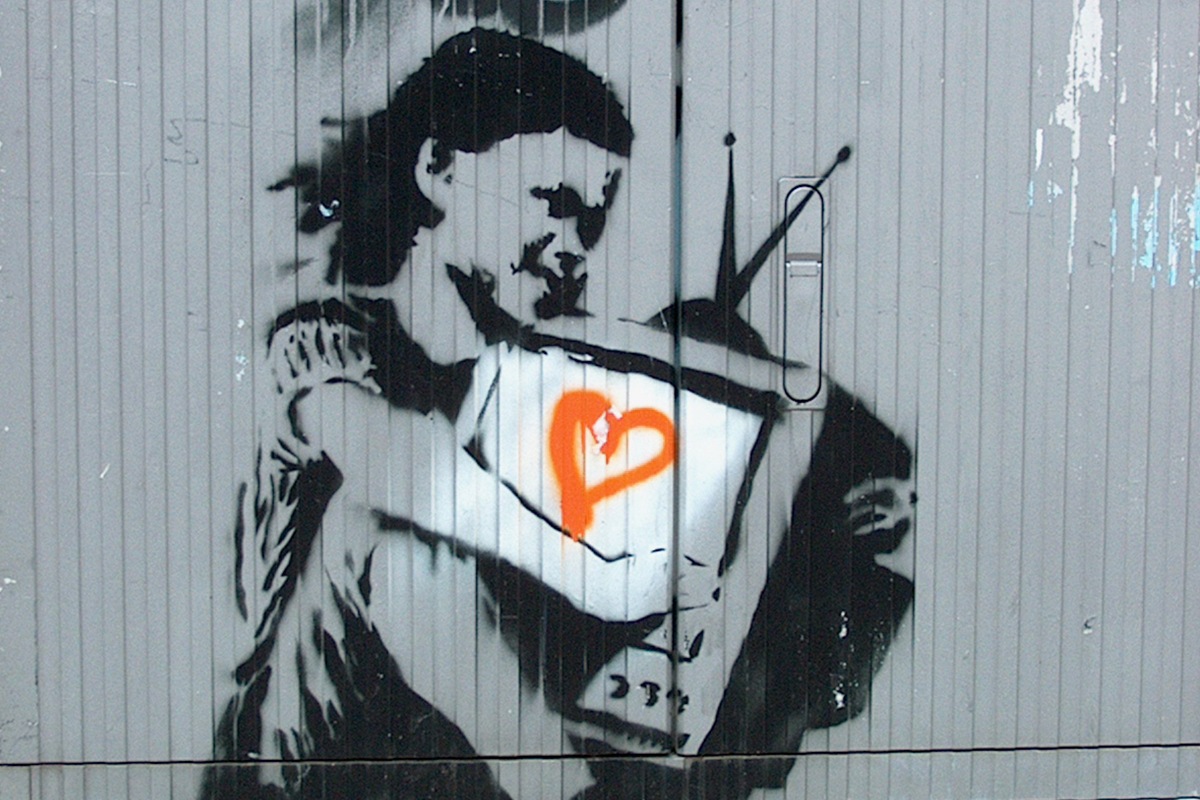 Ever since the west side of the Berlin Wall became a meeting point for graffiti artists, the city’s relationship with street art has been blooming. After the demolition of the wall, a number of prolific street artists were invited to paint on the empty, east side, and today the East Side Gallery is one of the biggest open-air galleries of such kind, and also a home to some of the most famous murals today. Even regardless of the famous wall, there are so many other reasons to take a tour around Berlin and enjoy the vibrant beauty of its walls (and for that matter, here are 8 of them, in one place). The network of Berlin’s street artists is constantly growing, and welcoming the renowned artists from all over the world.

Still, when you take a walk or a bike ride across Berlin, or when you take a look at the names of the artists who were there and left their mark, doesn’t it feel like something – or rather, someone, is sorely missing? Reportedly, in the summer of 2003, a rising street artist who was perhaps not that famous back then comparing to the impact that his art has now, went to Berlin and made a series of stencils.  But it seems like he didn’t return to the city after that, ever again. Why is that so? If Berlin is the Mecca of graffiti, then why didn’t the living legend of street art visit the city more often? 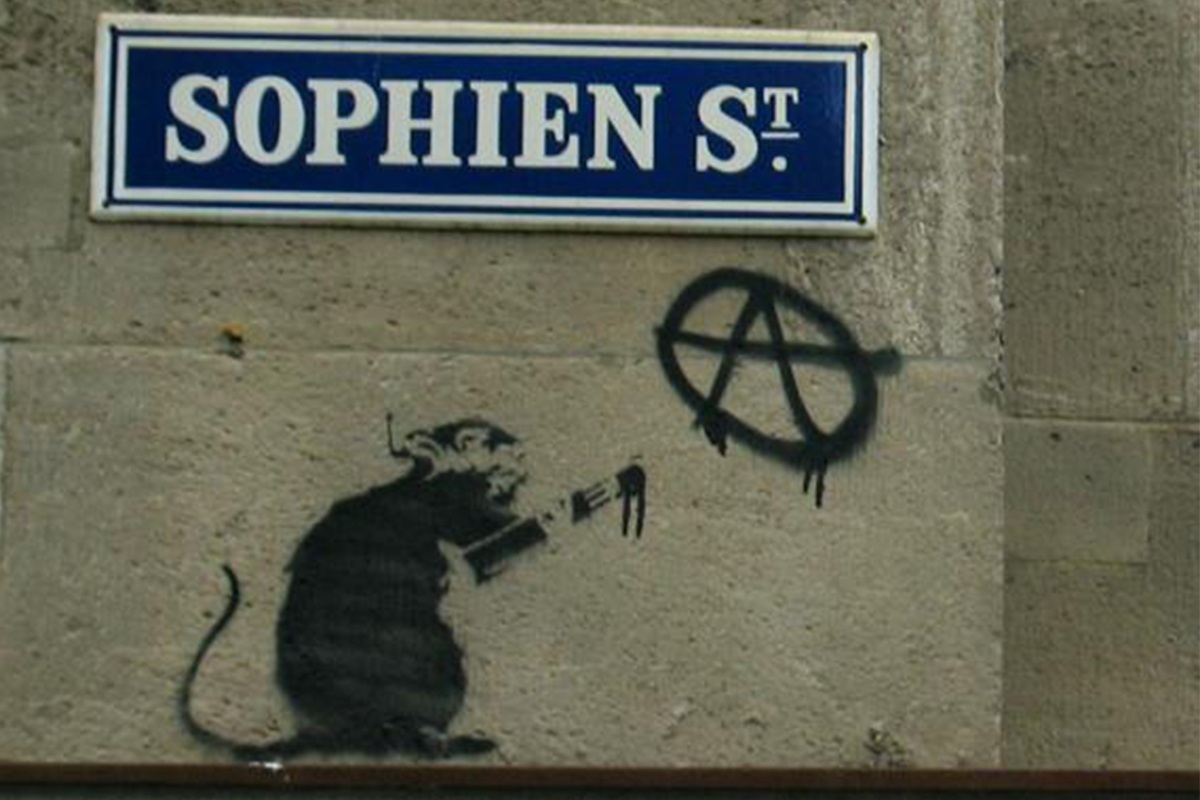 We are of course talking about the ever-famous Banksy. Coming from Bristol, where his stencils and public installations are now protected by the government, he made a vast number of iconic pieces of art, mostly across London, Bristol and the rest of the UK. Given that we all know about most of his popular works, it seems reasonable not to mention any of them in particular, since it would be hard to focus on only a few of the pieces from his rich oeuvre. If you want to come across his works on the streets somewhere else in the world, you might get lucky if you go to New Orleans, or Calais, France where he made The Son of a Migrant from Syria just recently, in 2015. And if by any chance, you really want to possess some of his works, you may even find it at auctions, where his pieces are sometimes being sold (without authorization). However, if you try to look for Banksy’s stencils or other types of street art in Berlin, you will probably end up being a bit disappointed. Although there is a tour guide for Banksy’s works across Berlin, which can be found on the Internet accompanied by a google map, the authenticity of most of these pieces is up for reconsideration. And even if they are original, most of the pieces from the list seem to have been made some time earlier, in the not-so-recent past. 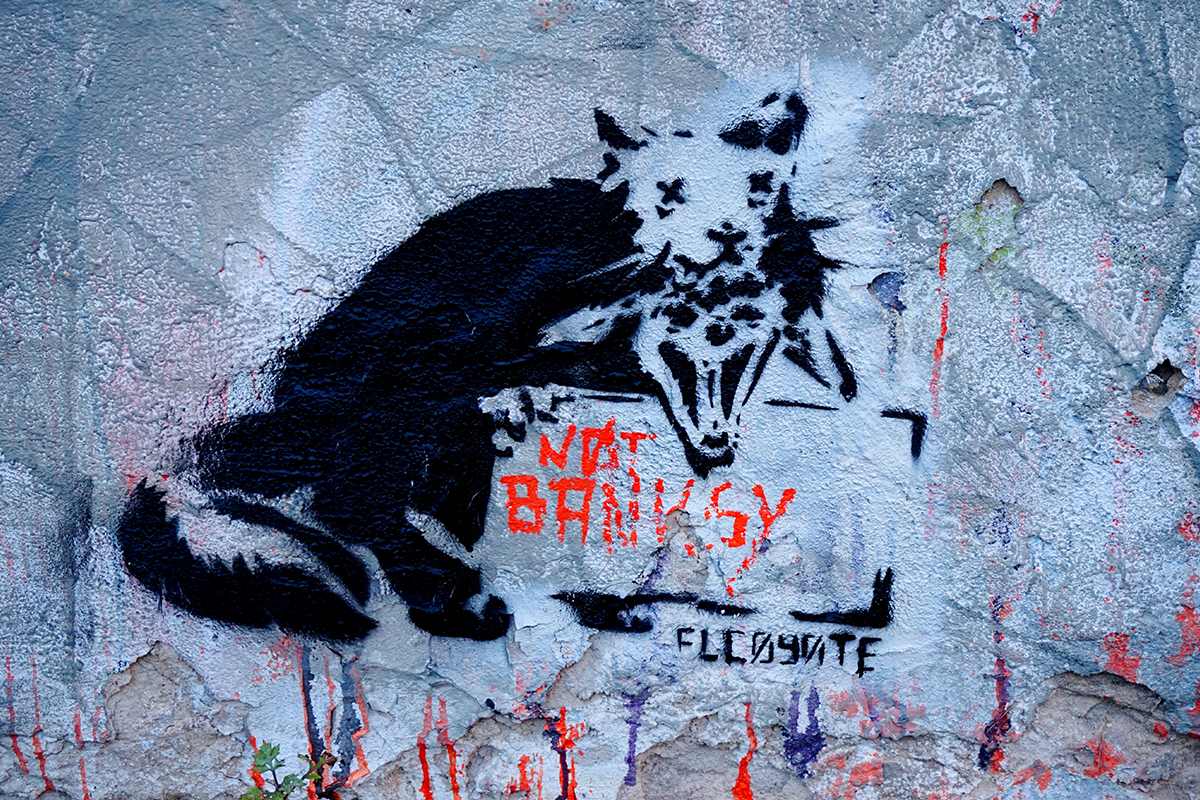 Distinguishing the Original Banksy – Has He Really Painted that Mural ?

It should be noted that detecting an original Banksy is not an easy task. Due to the fact that his identity remains unknown to the public, even though it was allegedly re-discovered just recently by a group of scientists in London, his official input is very hard to acquire. He doesn’t have an official page on Facebook, or Twitter, or anywhere else on the Internet actually – except for the (supposedly) official website which is also a cyber place with just a few pieces of information. Then, on the other hand, one thing that is very common is getting in touch with the numerous false Banksies, and falling under the influence of gossip and misinformation. Just try to search for his account on Instagram for example, and you’ll realize how crazy the whole fuss is. The entire subject is very obscure: searching for a Banksy in Berlin is so paradoxically strange that it almost seems like trying to combine two opposite, incompatible things. And suggesting that the potential capital of Street Art and Banksy don’t really get along is odd, isn’t it?

If we rely on the assumptions and follow the map suggested by Google, we can see that there are supposedly 34 pieces made by Banksy in Berlin. There are images provided for some of them, accompanied by a note about which pieces were featured in Banksy’s book, and some are left blank. Still, stencils have this unique nature, which makes them applicable to basically any surface and it is one of the reasons street artists love them so much – the practical matter. However, it also makes the authenticity of the piece very vulnerable. This means that someone else, who has seen and analyzed his works, and also has a little bit of talent and practice, can make a stencil that looks like Banksy’s, or anyone else’s for that matter. Since Banksy himself obviously doesn’t care too much about whether his works are being reproduced and imitated or not, no one can really be sure if the piece was actually made by him. There are also many other, younger artists, influenced by Banksy, whose style only incidentally resembles his own. And well, after all, Banksy was also an admirer of many other artists himself, such as Blek le Rat, and 3D, who also comes from Bristol. 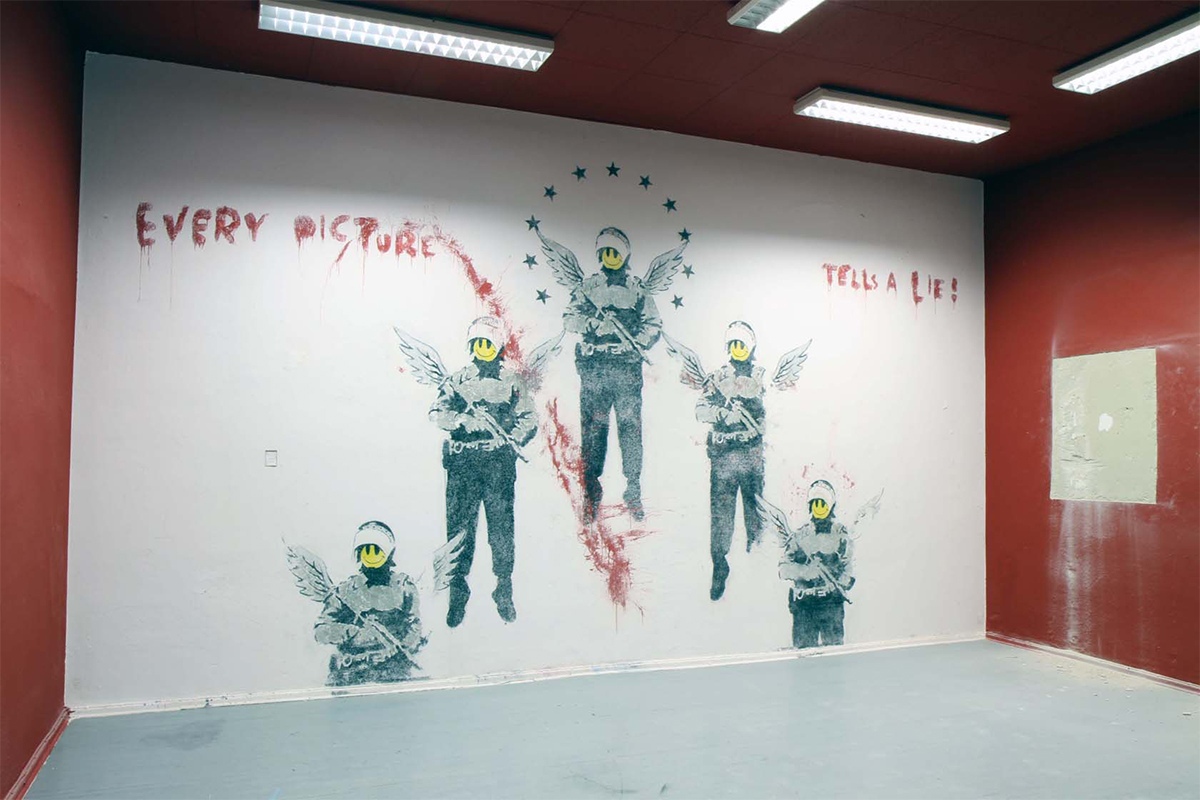 Every Picture Tells a Lie

There is one piece, though, that has been mentioned several times as an original Banksy, but in this case, things are perhaps even more confusing. It is allegedly a legal, commissioned piece named Every Picture Tells a Lie, and it was made for Künstlerhaus Bethanien in 2003. The piece shows five soldiers with angel wings, guns, and yellow smiley faces. According to the story told to the public, this mural was painted over several times since then and was covered with paint. However, after 8 years, in 2011 the piece was uncovered by Brad Downey, who apparently took part in the 2003 exhibition with Banksy. This restoration was done for an exhibition appropriately called What Lies Beneath, organized by the graffiti activist Adrian Nabi (do notice how things can lie beneath, and lie beneath). As you can see, the story has a very strange feel to it. First of all, it sounds like a nice opportunity to attract the attention of the audience, seemingly without involving the artist of the original himself. Secondly, the message coming from the wall suggests, that perhaps the picture, indeed, tells a lie (meaning: maybe this is not Banksy, but no one said that explicitly). That said, doesn’t it just add to the weird feeling that there is something mysterious going on with the whole Banksy – Berlin story? Even if there was not a story at all, now there definitely is. 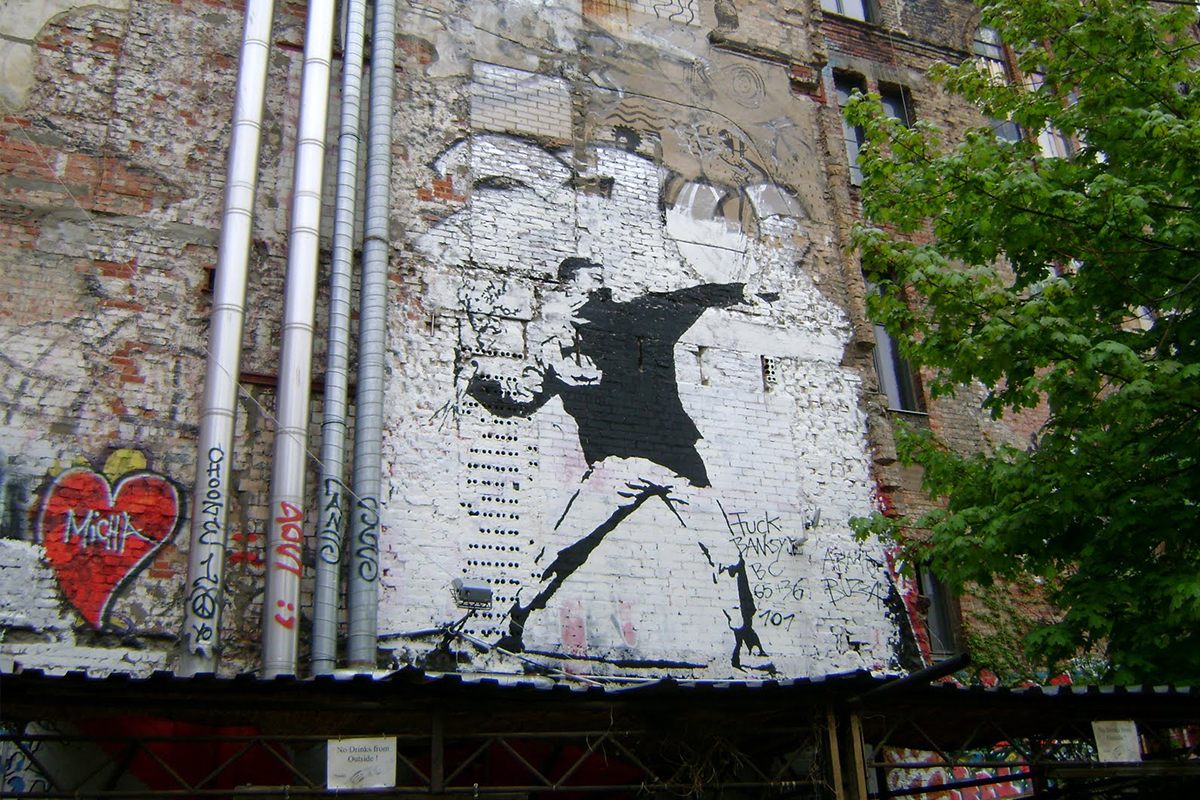 Berlin, one of Banksy’s Flowerthrowers, next to the F-ck Banksy tag

Berlin and Banksy – Stronger Together or Better Off Alone?

Now, let us return to the subject. Not that Berlin is in some urgent need of Banksy’s works, as it is already in possession of many gifted artists, but having the city’s welcoming tone in mind, we can’t help but wonder why there aren’t more of his works in the streets of Germany’s capital. Is it perhaps because of the thread of events that somehow made Banksy gravitate toward other parts of the world, such as Gaza, or Calais? Or is it the fact that Berlin’s art scene is so distinct and versatile already, that it doesn’t really need another stencil master to complete the picture anymore?

Perhaps Banksy is simply making room for other street artists to express themselves, which means that it is time for some younger generations to take over the scene. On the other hand, we could reflect once again on one of the questions outlined above, which concerns confronting the capital of street art with the very superstar of the discipline. At first, it sounds logical that these two should somehow go together and cooperate. But when you give it a second thought, is it possible that the two really don’t have to relate to one another, and that it is even better for the two streams to coexist? The nature of Banksy’s works, at least according to those who try to define it in order to discern it from the fake ones, is that it is very often placed in a busy, public space, visible and accessible to a lot of people, who should be ultimately tackled by them. He goes for the humorous tone, the pranks that catch our attention and have the intent to raise our awareness and to shake our everyday routine. When you think of Berlin, which has that unique spirit, so immensely free and inclusive, it seems like it is possible that it is already too updated – to call it so, all in all. Perhaps it is simply not the place that strives for his messages to be delivered, and the people of Berlin are already familiar with most of the issues we should be concerned about, thanks to the artists who have already painted the walls of Berlin.

In conclusion, what matters is that both Berlin and Banksy work their way to our thoughts. It certainly would be great to see Banksy’s comeback to this vibrant city (if he ever really was in it), which would make two great things collide and definitely result in something extraordinary. Until then, we can take the tour and try to see if these rats and girls are really Banksy’s works.