While wandering the streets of Berlin, there are great chances you will stumble upon some monochromatic images of lonesome children or isolated individuals, lurking behind the corners in quiet introspection. At that point, you can be sure you have discovered an artwork created by one of Berlin’s most prolific street artists who goes by the name Alias. Present on the German street art scene since the mid-1990s, Alias gained international recognition for his unique and instantly recognizable stencil style, subtle and intimate treatment of social and political issues. Carefully placed on specific locations Alias’ solitary figures convey powerful messages solely through their quiet existence on the streets, provoking compassion and strong emotional response from the beholders. Last September, Alias spent a couple of weeks in Lagos, Portugal, as part of the LAC residence program, and in the upcoming days, OPEN WALLS Gallery is set to revisit the artist’s residency through the release of artworks produced at that time.

Whether he creates on the public walls or in the studio, Alias prefers to work with stencils, using a limited color palette. Although his technique is continuously developing and evolving, black and white imagery came to define his style, along with the occasional splashes of red, which give an intense quality to his monochromatic works. As an experienced urban art creative, Alias is well aware of the importance of choosing the right location for his piece. Dealing primarily with the themes of harshness of everyday life in contemporary society, Alias juxtaposes innocence and vulnerability of his characters to the hostile environment of the city by choosing locations that underline the themes of isolation and solitude. The same idea is explored in his studio works, where the roughness of the streets is replicated through untransformed, recycled urban detritus, used for the creation of self-built canvases. In the works of Alias, locations and materials on which the images are placed have an essential expressive role. Furthermore, the relation between images and their location or background directly parallels one of the themes the artist is exploring – the way individuals are affected by their environment. 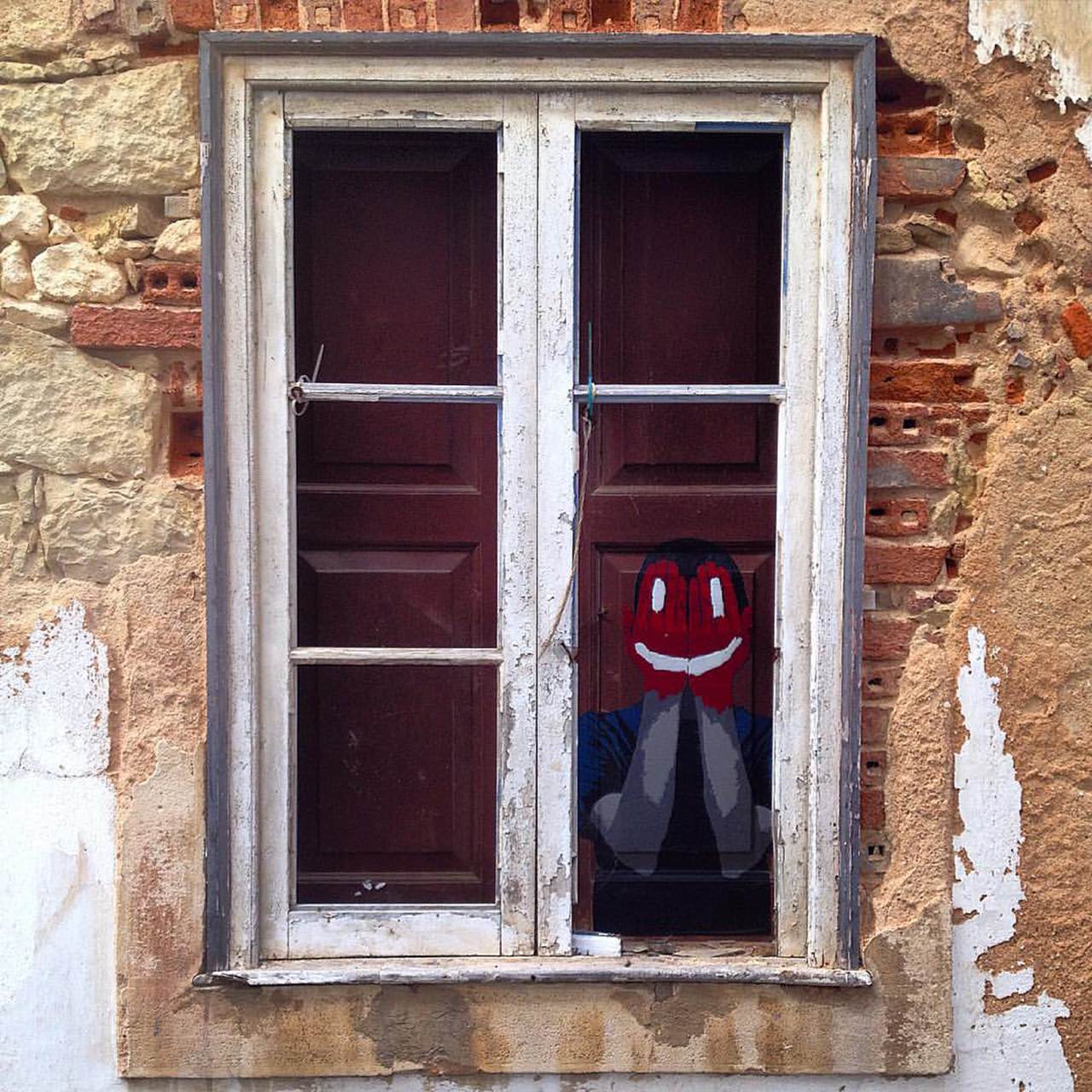 Alias, A (fake) Smile for Lagos, 2015, Courtesy of the artist and OPEN WALLS Gallery

Loneliness and Empathy in the Works of Alias

Unlike many of his fellow artists who choose to criticize contemporary society directly and address political and social issues explicitly, Alias is mostly interested in the way individuals intimately experience the harsh reality of the world they live in. From lonesome, injured children to disconnected teens and adults trapped in the monotony of their everyday lives, all subjects in Alias’ oeuvre seem isolated and detached from the society in one way or the other. By separating these individuals from their social context and depicting them in the moment of silent meditation, Alias evokes a universal feeling of loneliness, widely shared among members of contemporary society. The self-imposed isolation, which could be read as a way of escapism in other circumstances, is here canceled through public exposure of these lonesome subjects, which makes them even more vulnerable in the eyes of the beholders. Caught in the state of personal struggles and suffering, Alias’ subjects emanate the same feelings of solitude and misunderstanding any individual must feel, which makes them ever so relatable and inspires compassion and empathy.

Works from the LAC Residence in Portugal

Best known as one of Berlin’s most active street artists, Alias has moved his artistic practice beyond his hometown in the last five years, traveling frequently and participating in numerous art projects and festivals across the globe. One of the notable visits abroad was his recent art residency with LAC (Laboratório Actividades Criativas), which took place last September in the Portuguese town of Lagos. The cultural association LAC is the key factor responsible for the development of the thriving street art scene in this small tourist town on the Portuguese coast. Since 2011, LAC has organized ARTURb program (Artistas Unidos em Residencia), bringing many celebrated artists to beautify the neighborhoods and participate in various art events. Last year, along with Acacorleone, Bosoletti, Mr. Woodland, and Regg, Alias was invited to take part in the annual artist-in-residence program and the residency turned out to be a rather successful one. Except numerous paintings on the streets, the artists created a line of studio works in the reinvented space of the old jailhouse, where the association currently resides.

In order to celebrate this productive endeavor, OPEN WALLS Gallery will release three artworks created by Alias during his residency with LAC – Swingless, Teenage Riot and Lonely Skater, providing a new insight into Alias’ residency in Lagos.